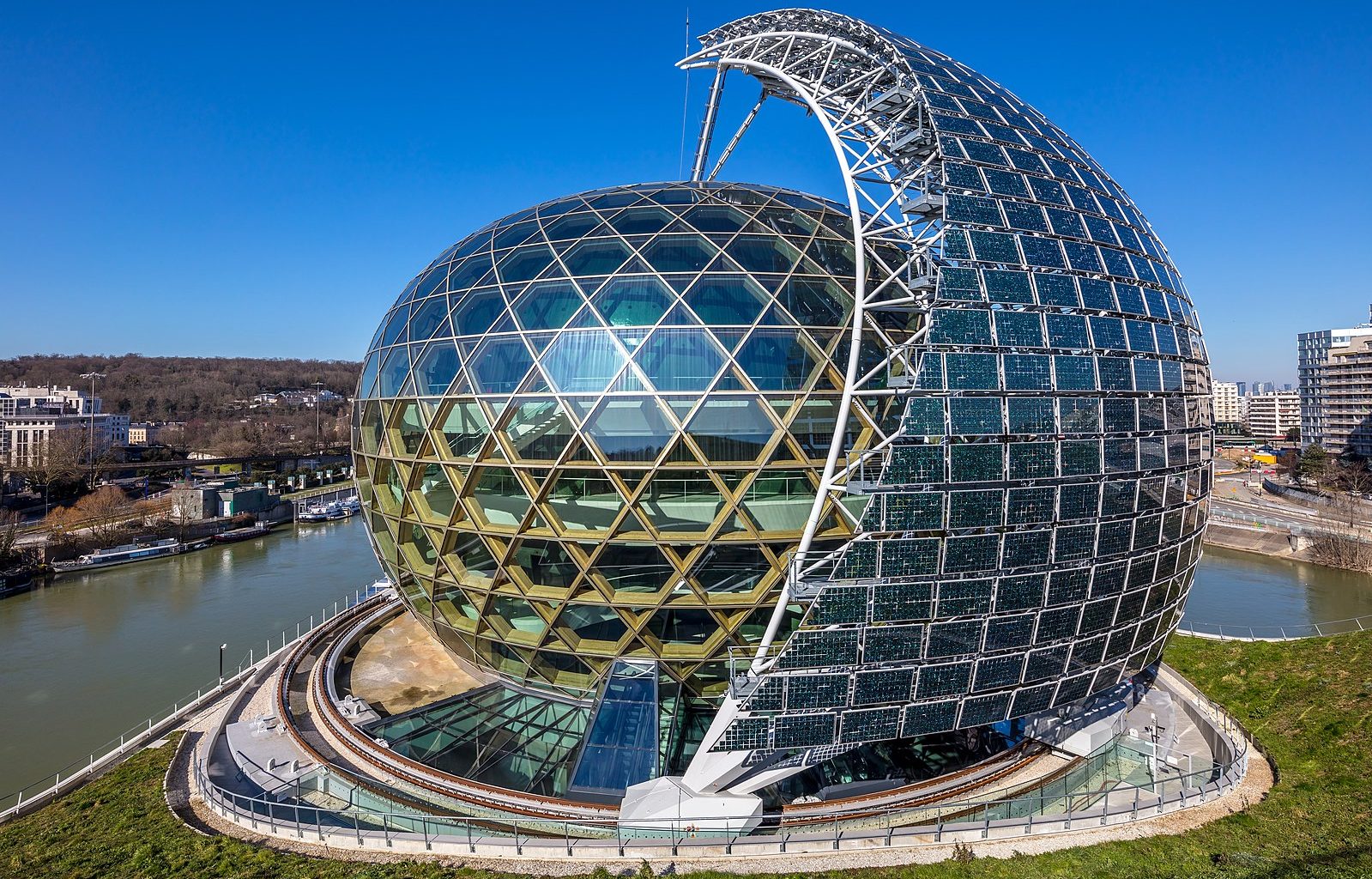 We celebrate Easter 2021 by presenting 7 egg-stravagant buildings. You will find these egg shaped beauties in Germany, Holland, France, UK, and… in a certain exotic location.

The London City Hall is located on the south bank of the River Thames near Tower Bridge. It was designed by Norman Foster and opened in July 2002.

The building has an unusual, bulbous shape, purportedly intended to reduce its surface area and thus improve energy efficiency.

It has been compared variously to Darth’s Vader helmet, a misshapen egg, and a woodlouse.

A 500-meter (1,640 ft) spiral walkway ascends the full ten stories. At the top, there is an exhibition and a meeting space called “London’s Living Room”, with an open viewing deck, occasionally open to the public.

2. “The Brain” – The Philological Library, Free University of Berlin, Germany

This ovoid library was designed by Foster+Partners and today it is one of Berlin’s most symbolic buildings. The library looks like a checkered eggshell embedded into the landscape. The Philology Library is also known as the “Berlin Brain” and houses over 800,000 books.

Made of steel and glass, the building has a strong focus on sustainability and energy-saving, employing a range of green design strategies.

La Seine Musicale is a music and performing arts center located on an island on the Seine river in the western suburbs of Paris, France.

The complex of buildings was designed by an international team of architects: Jean Nouvel, Shigeru Ban and Jean de Gastines. The most well-known icon of La Seine Musicale is an elevated egg-shaped auditorium for classical music. Much of the site’s daytime energy needs are supplied by a large mobile curved solar panel array that covers the smaller auditorium.

The Fundatie in Zwolle is a museum for the visual arts. Designed by Eduard Louis de Coninck of The Hague, this former Palace of Justice was built in the neo-classicist style between 1838 and 1841.

As eye-catcher, the neo-classical building has a giant futuristic egg on the roof. The egg is not a decoration – it houses a collection of modern art and is a great viewpoint to the historic city of Zwolle.

It is the second most visited attraction in Germany – not least because of the huge glass dome that was erected on the roof as a gesture to the original 1894 cupola, giving an impressive view over the city, especially at night.

The building itself was opened in 1894 but was severely damaged in 1933. Since the reunification of Germany and the returning of the German Parliament from Bonn to Berlin in 1991, Reichstag again has been hosting the parliament sessions.

The architect who reconstructed Reichstag in the 1990s is Norman Foster, who also designed the Free University Berlin Library.

This unusual houseboat located on the surface of the River Beaulieu in Hampshire, UK, was a floating, mobile workspace used by Stephen Turner to study the wildlife of the estuary. For 18 months it rose and fell with the tides, praising human relationship with nature.

„Aesthetically perfect, eggs contain in embryo the essentials for new life. From primate to plankton they emobody the idea of new birth and renewal, protection and fragility. In an urban 21st century where we are disconnected from nature I wanted to use this ancient symbol to nurture re-enchantment with the natural world”, Stephen Turner said.

The egg measured 6×3 meters and was just large enough to accommodate a hammock, a desk, a stove, and a bathroom. The houseboat was constructed mostly from reused and reclaimed cedar and other local, often scavenged materials.

The Cybertecture Egg is a 13-story commercial building located in Mumbai. It was designed by James Law along with Ove Arup’s building systems and engineering firm.

The building was designed as a sustainable green office. Its shape allows to minimize solar gain and the onsite electricity is produced by wind turbines and solar photovoltaic panels.

"Pay as you grow" model in office lease. It worked for Bitpanda, it can work for you