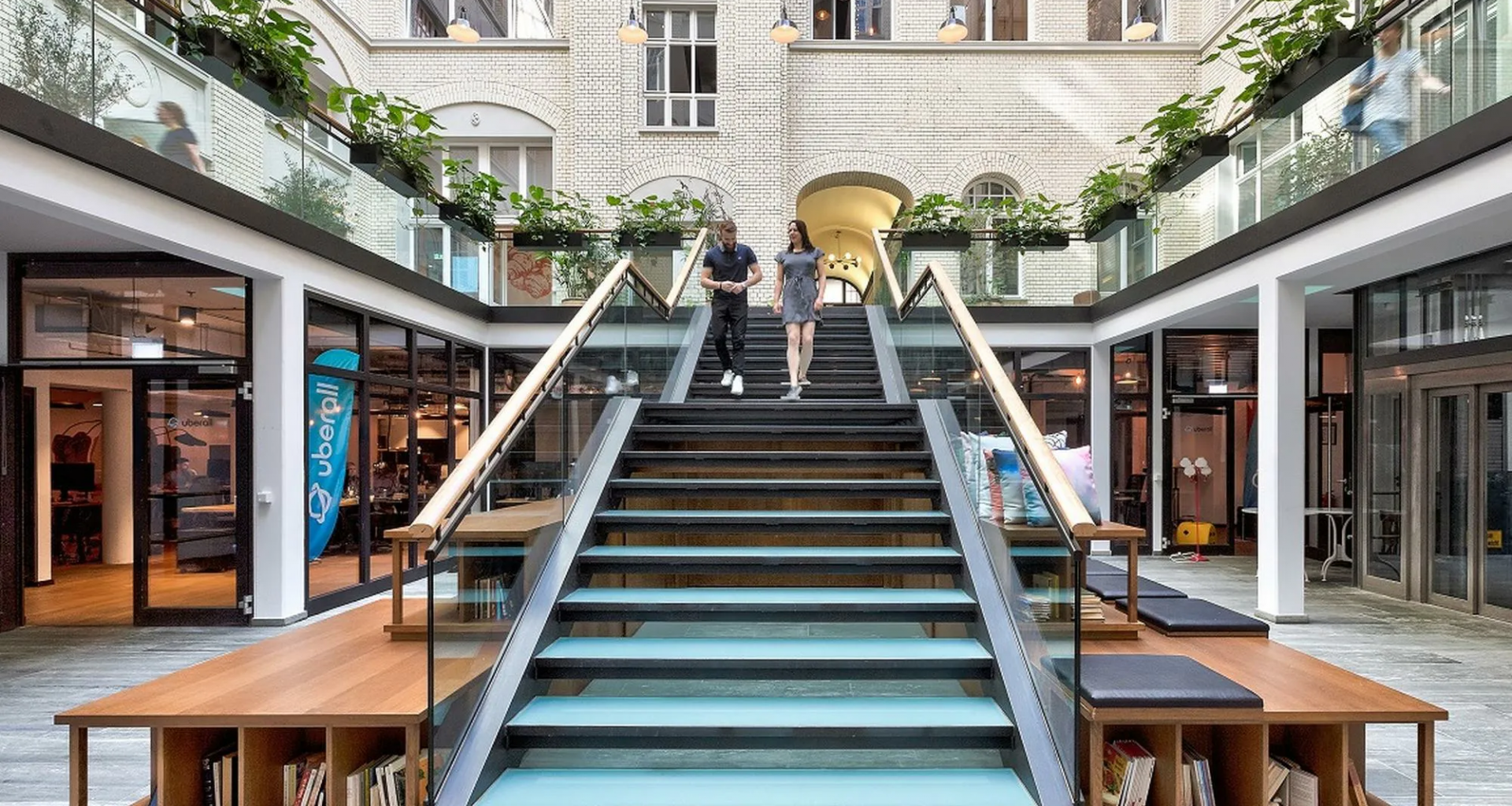 Berlin and London have always been subject to comparisons. What is life like in both cities? Which one grows faster? Which one provides a better ecosystem for startups? Today we are focusing on a flexible workspace market and how both cities differ in that matter.

Even though a 2019 coworking boom may have been slowed down a little due to the global pandemic, the future is bright for this industry. Traditional office space will no longer dominate the market, as businesses are shifting toward decentralizing into smaller branches across the cities, located within flexible office premises. With this in mind, we look at the two biggest coworking hubs in Europe: London vs Berlin. Due to their attractiveness, both cities have always been subject to comparisons. We’ve discussed the topic with Pauline Roussel, co-author of Around The World in 250 Coworking Spaces, a recent publication exploring the many shapes of coworking around the world.

London ranks first in Europe in terms of venture capital deals, which is reflected in the coworking landscape: the main clients are startup businesses. Intense urbanization has been shaping not only the City – even artistic districts like Shoreditch have become more business-oriented, with the construction of class A office buildings. Niche coworking spaces are not as common anymore. London is also known for its local coworking chains like The Office Group, successfully competing with giants like WeWork or Regus.
Berlin didn’t observe such a rise in multi-location spaces, and while also being a vibrant hub for startups, it maintained its unique, creative culture with niche, theme coworking spaces in postindustrial buildings, dedicated to particular groups like artists, craftspeople, or lawyers.

Another interesting aspect to flexspaces (observed mainly in London), is a high adoption rate of a walk-in coworking concept (also called workspace on demand). It is not just the business people that visit London that need a workspace for a day or two, but also Londoners who find it natural and convenient to decide on the go: “Today I’d like to change my work environment, so I’ll just walk into this coworking space in my neighborhood and book a 1-day membership”.

To go deeper into the London vs Berlin coworking scenes, let’s have a look at a few examples.

While coworking as a concept started earlier than 2005, with spaces like C-base in Berlin paving the way to community at work in 1995, it officially got branded as such in San Francisco by Brad Neuberg. Interestingly enough, that same year, both Berlin and London got into their coworking early days through the opening of Sankt Oberholz and The Hub. And while both cities soon got populated with collaborative spaces, these two took a very different approach.

When Sankt Oberholz opened its door to the public in 2005, Koulla Louca and Ansgar Oberholz set out to bring a new type of work environment to Berlin, one that was more inline with the way they worked. Hence, they transformed what used to be a beer hall into an open cafe with free internet.

Sankt Oberholz never really branded itself as a coworking space although since day one they allowed people utilizing their space to do their work and meet one another. Fast forward to today, Sankt Oberholz is now a key player of the Berlin ecosystem, reshaping the way we work towards a more flexible approach, in the capital and beyond.

Meanwhile in London, in 2005, the first coworking space to open and be officially branded as such came to life. Curiously, The HUB was an initiative led by a group of students who started a space after finding inspiration in Johannesburg where they had experienced the power of community work first-hand. Through their coworking space, the group aimed at bringing together social innovators and really embodied the spirit of grassroots entrepreneurship. From one space in Islington back in 2005, The HUB grew to Impact Hub, a global network of 100+ locally-founded impact innovation incubators, accelerators, coworking spaces, and nonprofit organizations.

– It has been very interesting to visit different Impact Hub around the world – says Pauline – we’ve had the chance to discover Impact Hub in Tokyo, Lisbon, Berlin, London, Istanbul, Madrid, New York, and many other cities. Although they belong to the same brand, their approach is very targeted at the local environment and solving local issues, while cultivating a global impact through the community and network.

Born in Tel Aviv, raised in Berlin, grew up in London

In 2015, and close to a decade after coworking had started in Berlin, the landscape became richer and richer with companies from abroad choosing the city to grow their brand. Why would they do that? Back then, Berlin was going through a lot of changes, with its startup ecosystem blossoming by the day and more and more small to medium sized companies seeking alternatives to traditional office leasing.

What was the first non-German coworking brand to settle in Berlin? Mindspace.

This boutique coworking brand brought to Berlin a new, design & experience-focused approach to coworking. What does “experience-focused” mean? As Pauline explains: – In “Around The World in 250 Coworking Spaces”, Mindspace shared with us a sentence that stuck with me. They talked about the micro-culture and the importance of being different in each and every location they operate although it is the same brand. Hence, when you visit Mindspace in Berlin or in Amsterdam, you might not find similarities between the two locations because as a brand they cultivate and focus very much on providing an experience that resonates with the local audience. One thing I also love about Mindspace is the local city guides they create for each city they are in, with a selection of places they love and a playlist.

Aside from its standout design, Mindspace was also the first brand in Berlin to operate in larger types of buildings. And it didn’t take long for Mindspace to find its audience in Berlin. Fast forward to today, the brand currently operates 3 spaces in the capital, and 8 across the country.

Using Germany as a learning playground, Mindspace opened its flagship space in London 2 years later, in 2017, in Aldgate, and currently operates 3 workspaces in the capital city of England.

Born and raised in London, grew up in Berlin

On the opposite side of the spectrum, lies The Office Group. A born and raised in London brand, providing high-end flexible workspaces. While the brand started back in 2003 with the desire to reinvent the office space market to improve the way people work, it didn’t brand itself as coworking at first, rather as a shared workspace.

Over the years, The Office Group has blossomed across London, taking over buildings of all sorts, from historical ones to modern ones, and transforming them into beautifully designed workspaces, with a wide range of amenities, going beyond work. – I remember the first time we visited TOG in London. I was so surprised when I saw that this space offered a gym and a cinema to its community – adds Pauline. – It really showed how much the brand cared about providing an experience that goes beyond work, offering its community many ways to connect outside of work and adding health and culture into the workplace.

– Another thing I love about The Office Group is that they brand each and every location they operate differently. So much so that you do not immediately know you are at The Office Group when you enter a location.

Operating over 50 locations across London, The Office Group made its first move abroad in 2019 and selected Berlin as its first international location. – With Kontorhaus, the first space opened by TOG in Berlin, it feels like The Office Group gathered all they’ve learned since they started to create the perfect workplace: inviting, calm, beautifully designed, rich in its content, well connected but also architecturally fascinating, mixing the old with the new and bringing together two buildings from two different times in History.

Similar concepts, yet a different approach. Workspaces for parents?

And in two different cities like London and Berlin, you can also come across similar concepts done differently. Take JuggleHUB and Cuckooz Nest, two coworking spaces targeted at parents and providing in-house childcare.

Both brands are owned by working moms who decided to create their own space after giving birth to their first child and experiencing issues with getting back to work or finding suitable daycare to go to. But aside from that, both brands are not just for working moms. They are for parents and non-parents. The common vision they share is to show that there is an alternative that exists when considering work/life balance. One where we do not have to compromise so much and where our family can also integrate into our workplace by having an in-house daycare.

– I remember the first time I visited JuggleHUB in Berlin, one of the founders, Katja, told me that many members do not have kids yet but they really enjoy the family atmosphere that floats around the space – says Pauline.

As both brands work with their local issues to support working parents, their approach is slightly different. At JuggleHUB, the founders Katja and Silvia recently launched a Parentpreneurs network to support parents in starting their own businesses, offering them the opportunity to join an incubator in partnership with Google for Startups and other coworking spaces with childcare facilities based in Berlin.

In London, Cuckooz Nest took on the mission of supporting larger companies in putting child care to their agendas and make it a differentiating factor in their recruitment and talent retention strategy. How? They launched a consultancy service which offers support in planning, insurance, fit out, hiring process, obtaining the OFSTED certification (required to run a childcare facility in the UK) and technological support.

While the list could go on and on in comparing London vs Berlin coworking scene, a good conclusion is that each workspace is inherently different. Due to their human nature, each and every space offers a different experience, which is also influenced by the local culture and habits. As Pauline concludes: – Coworking is the same dish everyone cooks differently. Some might add more salt to it, and other more chili. It’s coworking in the end, but in your own sauce.

If you are interested in discovering more coworking stories, make your way on “Around The World in 250 Coworking Spaces” website to check out the full project.

And if you’d like to explore and compare various workspaces, use our real-time & real price Search tool 🙂

Everyone can be a leader

Experiential office – a space that responds to your needs